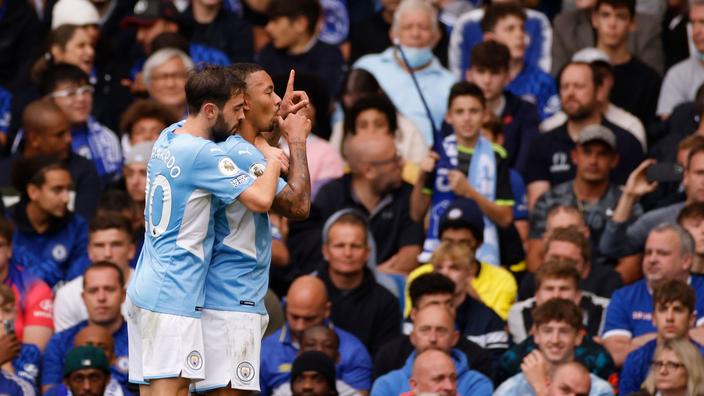 Author of an impressive performance, Manchester City won on the smallest of the marks on the lawn of Chelsea. A major success in the title race!

The Blues rush to the attack to get the equalizer!

Chelsea will have 4 more minutes to get the equalizer.

On a long ball in depth, Ederson and Havertz collide. Both players are affected.

The German defender commits an anti-play foul and receives a warning.

On a quick transition, Grealish is launched into space. The British attacking midfielder comes face to face with Mendy and tries a little dive pushed back by the goalkeeper of the Blues!

Werner accelerates and overhangs the right side, before centering back. As Havertz prepares to strike into the box, Walker springs up and clears the ball. A nice saving comeback!

De Bruyne is replaced with Mahrez.

On an indirect free kick from De Bruyne, Laporte throws himself with his foot forward at the far post. His attempt does not go far from Mendy’s right post!

The defender of the Blues is warned for having surrounded De Bruyne.

After quickly playing some transitions, Manchester City now confiscates the ball to resume their usual game.

The match goes from one camp to another. Both teams push to score: Chelsea to equalize, Manchester City to break. The meeting can switch from one side to the other.

Lukaku plays perfectly with his body to wind Laporte. The Spain international commits a foul and receives a warning.

Chelsea are not far from breaking down. On a rapid transition, Manchester City is projected in numbers. Mendy manages to deflect a cross from the left. Jesus inherits the ball and tries his luck while the goalkeeper of the Blues is no longer in his cages. It takes the intervention of Thiago Silva, on his line, to prevent the Brazilian from registering a double.

Kanté gives way to Havertz. The Blues should return to their usual system, 3-4-3, with Lukaku in the lead, supported by Havertz and Werner.

Since the opening of Manchester City’s score, the pace has been more sustained. Chelsea project more than in the first period to seek the equalizer, leaving more space.

In the penalty area, Grealish defeats Azpilicueta and continues with a strike from the right foot. Mendy intervenes perfectly and pushes the ball back for a corner. Chelsea got hot!

Manchester City logically opens the scoring! Following a corner kick, Cancelo’s shot reaches Jesus’ feet, positioned with his back to the cages. The Brazilian makes a feint and takes his chance as a pivot. His attempt, deflected by the Chelsea defense, deceives Mendy, who can only watch the ball finish in the back of his net. 0-1 for City!
at 14:37

Near the penalty area, shifted to the left side, Grealish takes his chance with a curled shot. His shot does not go far from Mendy’s cages.

Lukaku has just kicked off the second half.

The players return to the pitch

The game is about to resume.

A great match so far. A beautiful opposition of styles between Manchester City which presses high and keeps the ball to the maximum and Chelsea, more defensive which seeks to explode during the transitions. There were chances in this first half, but no goals yet.
at 14:17

Both teams will have two more minutes to gain the upper hand before the break.

Served between the lines, Foden found Jesus in the area thanks to a superb ball stung that lobbed Rüdiger. The Brazilian controls the chest and continues with a strike from the left foot … which passes by. What action!

De Bruyne is served in the midfield. The Belgian turned towards the goal and unleashed a strong kick. But it’s above.

On a transition, Grealish fixes the block of Chelsea and shifts Rodri in front of the penalty area. The middle of the Citizens takes his chance and sees his attempt being deflected by Rüdiger. It was well played.

Chelsea recovers the ball and tries to throw themselves quickly. Kanté alerts Werner in depth but Ederson comes out of his cages, anticipates and clears the ball.

Thiago Silva replaces him. The Brazilian will settle in the central defense of the Blues while Azpilicueta will shift to the right piston position.

Chelsea’s right piston appears to be suffering from ankle pain again, no doubt due to their previous duel with Grealish. He will give up his place.

Alonso misses his recovery to Kanté. Grealish inherits the ball and tries to throw himself forward. It was without counting on the ability of the French international to shoot in the feet to recover the ball. A magnificent intervention.

Manchester City have been holding onto the ball for several minutes, looking for a gap. But Chelsea leaves very little space.

Nice ball exit from Rüdiger who finds Werner in a free space. The Blues striker enters the box and tries his luck. It is countered for a corner by Walker. Chelsea is doing better.

The match gets carried away! In the wake of the situation created by De Bruyne, Werner is found in depth by Alonso. The German delays and centers for Lukaku … who misses his recovery!

The Belgian overflows on the left side and center back … Nobody follows!

Manchester City monopolizes the ball without being dangerous: 0-0 (12th)

If the Citizens have ample possession of the ball, they can not force the lock of the Blues. The high density in the axis set up by the men of Thomas Tuchel embarrass the players of Pep Guardiola.

Chelsea’s right piston is hit following a duel with Grealish. The healers intervene. He will take his place again.

The Chelsea defender made a strong tackle, but regulatory according to the referee of the meeting, to prevent Gabriel Jesus from bringing danger into the box.

The Blues fail to get out of their camp. The pressing of the Citizens prevents them from relaunching properly and finding their offensive players.

In these first minutes of play, it is Phil Foden who occupies the position of attacker, in false nine. Jesus is on the right side and Bernardo Silva plays in the midfield, next to Rodri. De Bruyne is a step up.

The Citizens seek to put a very high pressing from these first minutes to hamper the Blues’ raises.

The players enter the lawn

The match will start in a few moments!

Pep Guardiola decided to set up a very offensive 4-3-3. Jack Grealish, Bernardo Silva and Gabriel Jesus should be lined up in attack, in front of a duo of torchbearers Phil foden and Kevin De Bruyne. Rodri is established as a sentry in front of the defense composed of Joao Cancelo, Aymeric Laporte, Ruben Dias and Kyle walker. To see if Gabriel Jesus will evolve like a number nine, or if he will take care of the right lane to let Bernardo Silva play in a false-nine register.

Chelsea with Kanté, Lukaku and Werner

Thomas Tuchel has apparently chosen to change his game system. The Blues coach has decided to strengthen his midfield, by aligning N’Golo Kanté and Mateo kovacic before Jorginho, and put two forwards with Romelu Lukaku and Timo werner, probably to hurt Citizens on the transitions. Behind, it’s classic with Edouard Mendy in the goals, Antonio rudiger, Andreas Christensen and Cesar Azpilicueta in central defense and Marcos Alonso and Reece james on the coast. To note that Thiago silva and Kai Havertz are on the bench.

The compositions have fallen

Premier League leaders, with the same number of points as Liverpool and Manchester United, the blues want to continue their superb start to the season and further distance one of their rivals for the title of champion of England.

For his part, Manchester city point to 5th place in the standings three units behind his evening opponent. Pep Guardiola’s men want to bounce back after their draw against Southampton and thus come back to the height of the London club.

An enticing match on paper

This meeting is one of the most beautiful posters of the Premier League, but also of Europe. It is the confrontation between two great tacticians, with different principles: Thomas Tuchel and Pep Guardiola. It is also the revenge of the last final of the Champions League … won by the Blues.

The match will start in just under half an hour.

Welcome to Le Figaro to follow with us the shock of the 6th day of the Premier League between Chelsea and Manchester City! 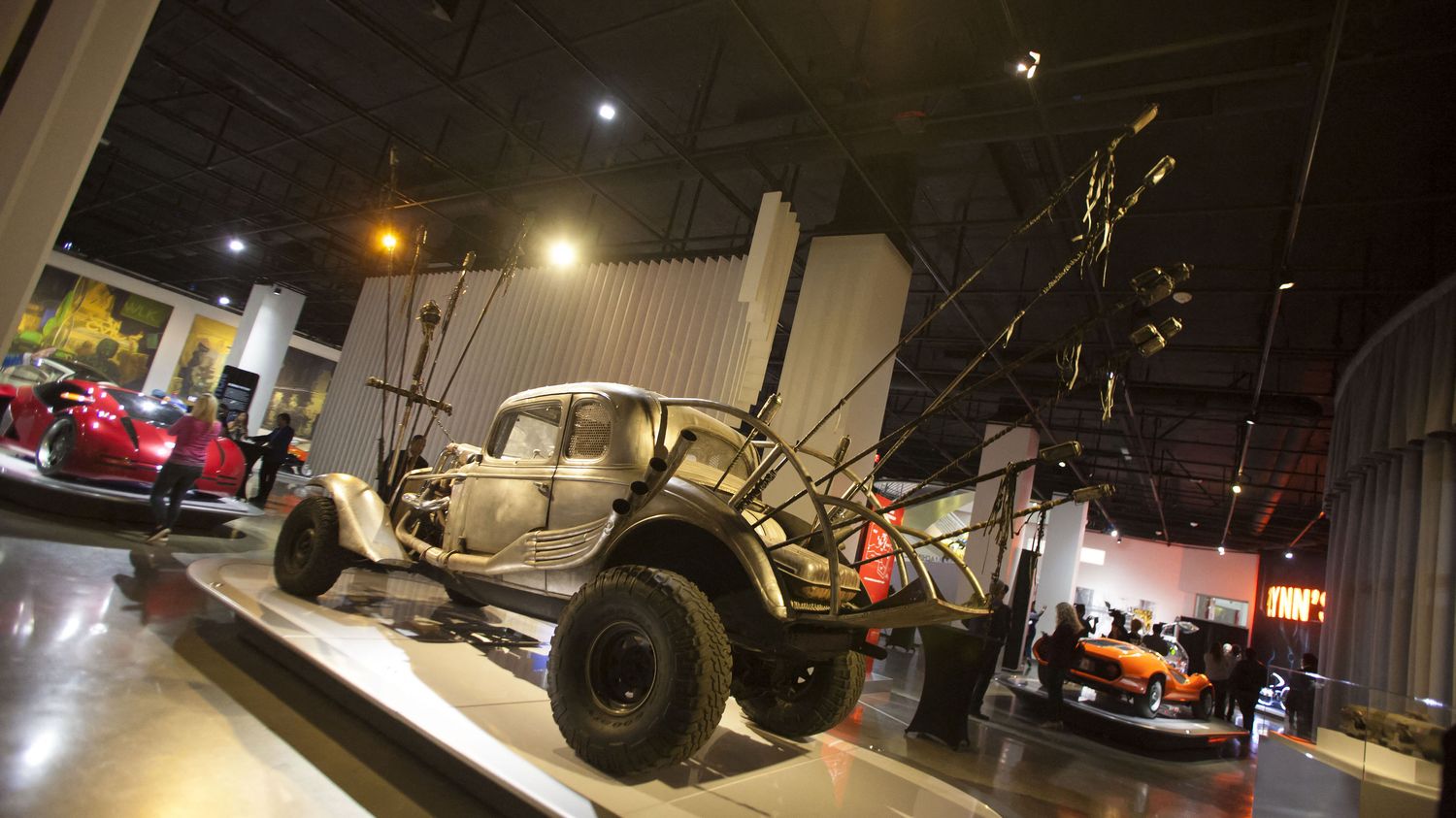