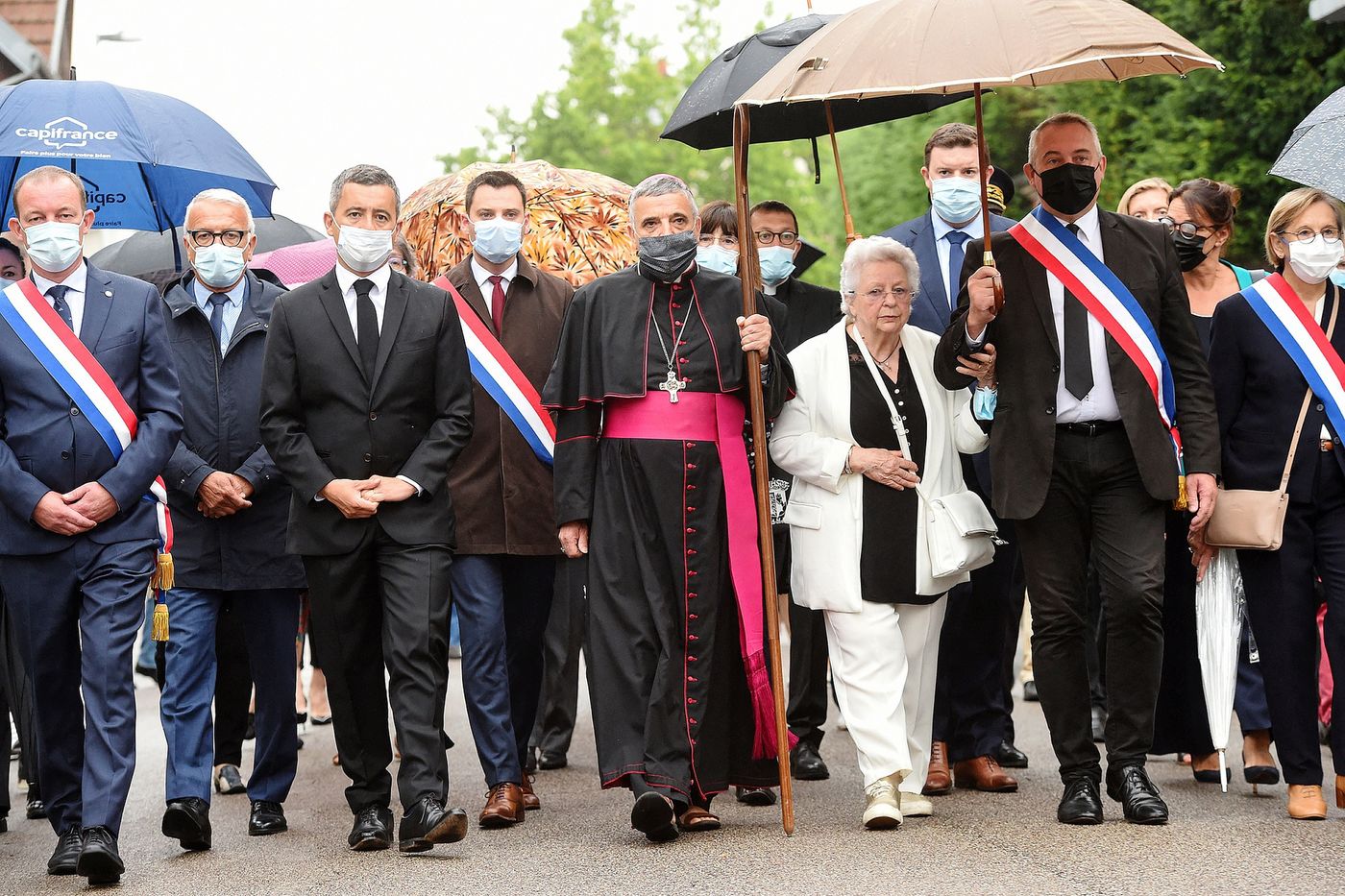 From our special correspondent

The showers pushed the officials and the assistance to find refuge under the roof of a communal hall, but the terms of the morning tribute, initially planned in the open air, were not changed. “The government of the Republic commemorates its martyrs and there is no doubt that Jacques Hamel is part of “, declared the Minister of the Interior, Gérald Darmanin. “It is love which made Father Jacques Hamel live here in Saint-Étienne-du-Rouvray, and which makes him live today in our hearts and with God”, affirmed, in his turn, Mgr Dominique Lebrun.

Five years to the day after the assassination of the priest in the Saint-Etienne church by two Islamist terrorists, the Archbishop of Rouen celebrated a mass on Monday, July 26, before participating in a republican ceremony in memory of the religious. In addition to Gérald Darmanin were present Roseline Hamel, the sister of the disappeared, and many elected officials of the territory, who came to honor the memory of Father Hamel in the city of Seine-Maritime where he tragically lost his life, stabbed at the age of 85. during an attack claimed by Daesh.

Jacques Hamel settled in 2000 in this working-class locality in the Rouen conurbation. For Hubert Wulfranc, Communist deputy of the constituency and mayor of the commune at the time of the attack, he “Was totally ours”, without ever departing from “Its simplicity and its modesty”. His successor as mayor, Joachim Moyse (PCF), insisted on the “Message of peace, fraternity and hope”, left behind by the man of the Church.

From a distance, via social networks, Prime Minister Jean Castex also paid tribute to the murdered priest. “May his humanism and his message of fraternity guide us for a long time in the face of hatred and barbarism”, said the head of government. Already on site last year, Gérald Darmanin spoke of a “Engaged citizen”, victim like others of a “Islamist barbarism” who “Touches all the symbols that make the West and, ultimately, make France”. The host of Place Beauvau did not fail to reaffirm that “We will have to fight strongly and probably for a long time to come” against this threat. He also reiterated that the prefects had just been called to “Vigilance” this summer, due to the recent broadcast of a video by a propaganda organ of the terrorist group Al-Qaida directly targeting France, and more particularly Emmanuel Macron and his Minister of the Interior. This morning of tribute had also been placed under close surveillance, with an important security device. A few dozen parishioners came to take part, like Odile Préaux, a 78-year-old woman from Stéphane. “I come every year, it’s important, she testifies. It was a beautiful ceremony. But every time I walk into the church, it upsets me a little bit. “Sister Danièle, who was present during the tragic service of July 26, 2016, also admits that this tribute has “Stirred quite a bit”. “I can no longer put myself in the place where I was on the day of the tragedy”, she confides. Guy Coponet was seriously injured. “I thank the Lord for being still here, quite simply”, he said today, without wanting to comment on the upcoming trial of four people suspected of having helped the terrorists, the latter having been killed by the police (read the benchmarks) : “Justice will do what needs to be done. “

Bishop Lebrun also spoke about this trial, recalling that he is praying for “Two dead assassins” and the four accused who will appear in 2022: “The justice of men must pass for them, according to the laws of our country and according to the great principles which underlie human life. But God’s righteousness does not stop at declaring good and evil, it strives to make those who are not righteous. It is my hope, it is the hope of Christians: by the grace of God, all can become better, including accomplices of assassins. “