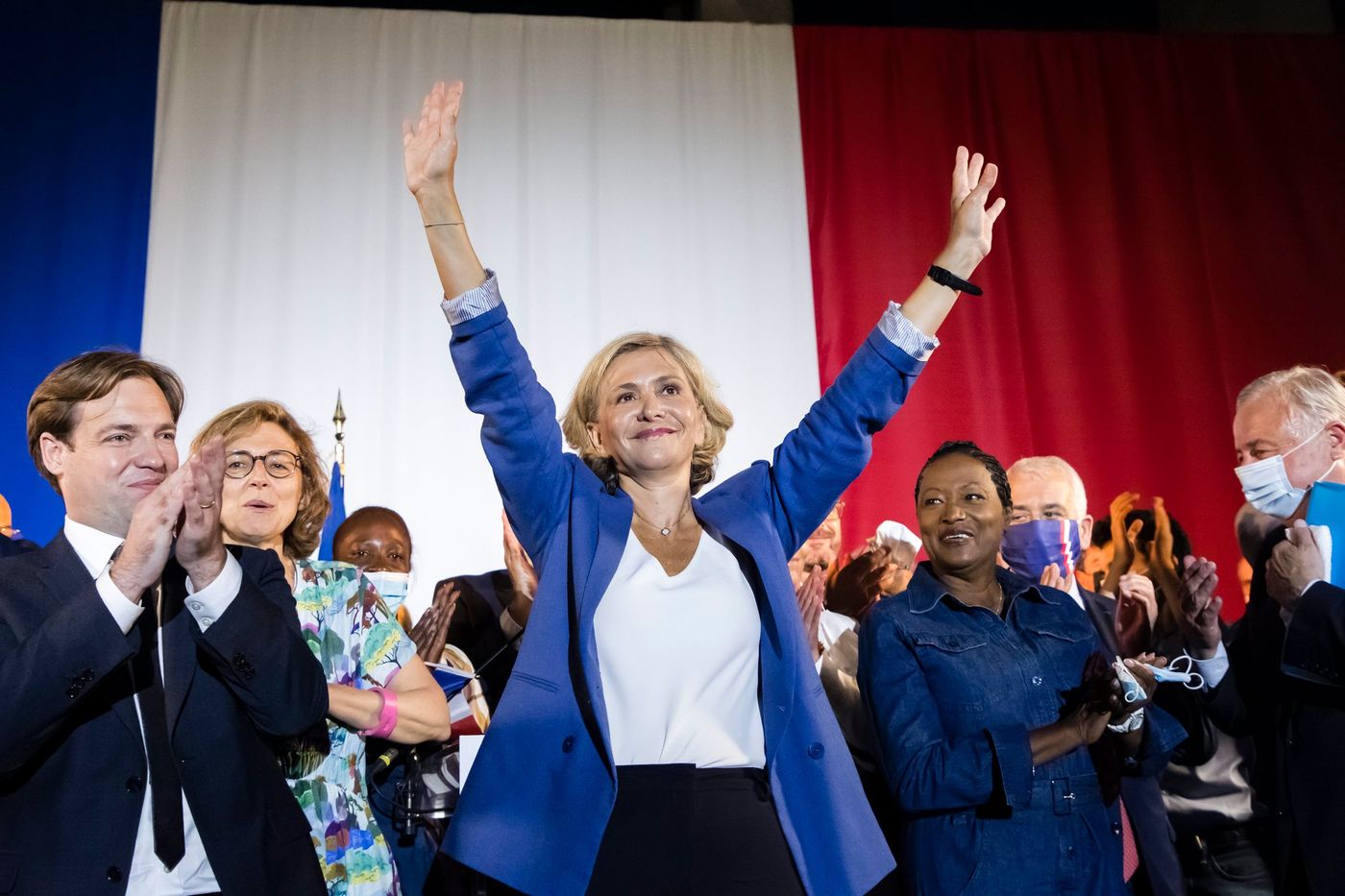 Jean-Luc Mélenchon (La France insoumise) called for “Do not give a region to the National Assembly”. Faced with the abstention record, the leader of LFI questioned the “Special responsibility” of the government. “A democracy without voters is no longer really a democracy. We appeal not to add to all the woes of our democracy one more affliction: we will do what is necessary to convince each and everyone that we must not give a region to the National Assembly because it is a political formation that embodies violence ”, did he declare.

⇒ 9:15 p.m. [ÎLE-DE-FRANCE] Valérie Pécresse well in the lead, ahead of the RN and EELV

With 36.4%, Valérie Pécresse (Libres!), Outgoing president supported by LR, is well in the lead (according to Ifop-Fiducial estimates for TF1 / LCI). The former minister is banking on his re-election as a springboard for his national ambitions. With the presidential election in sight, even if – unlike her counterpart Xavier Bertrand in Hauts-de-France – she has not yet declared her candidacy.

Follow the RN (Jordan Bardella, 13.7%), which obtains five points less than the FN six years ago, and the presidential majority (Laurent Saint-Martin, 11.6%). This score is disappointing for a region sociologically favorable to macronism, an electorate on which Valérie Pécresse has largely taken a bite.

Fragmented into three lists, the left totals more than a third of the votes: 12.9% for Julien Bayou (EELV), between 10 and 11% for Audrey Pulvar (PS) and for the deputy Clémentine Autain (LFI-PCF). It will therefore be the national secretary of EELV who should lead the left in the second round: a relief when the risk of elimination loomed, if no list had reached the threshold of 10% of the votes cast.

The results are disappointing for the National Rally (RN). Only Thierry Mariani in Provence-Alpes-Côte-d’Azur reached the same level as his opponent, Renaud Muselier (LR, with the support of the presidential majority), but well below the score of the FN six years ago.

In Hauts-de-France, on the other hand, Sébastien Chenu is left behind by twenty points by the outgoing various right-wing president, Xavier Bertrand. In regions where he hoped to create a surprise, their candidate, without reserve of votes, does not seem able to win in the second round: Burgundy-Franche-Comté, Center-Val de Loire and the Grand Est.

Which list is at the top in your department? Also find all the results by clicking on the image below.

⇒ 8:50 p.m. [FRONT RÉPUBLICAIN EN PACA] The PS withdraws its list in the face of the danger of the far right

The first secretary of the Socialist Party Olivier Faure said Sunday evening on TF1 that if the RN list led by Thierry Mariani could win in the PACA region, the Socialists would withdraw in the second round.

The second round should therefore oppose Renaud Muselier, LR already supported in the first round by the presidential majority, and Thierry Mariani (RN-La Droite populaire). Both men reached 34% in the first round.

The difficulty of the presidential majority in approaching local elections is confirmed. In many regions, its lists are eliminated, with less than 10% of the votes cast: Auvergne-Rhône-Alpes, Hauts-de-France and Occitanie.

⇒ 8:35 p.m. [RÉACTION] Laurent Wauquiez to the abstainers: “I need your support”

“Tonight, it’s a clear choice for a clear course”, reacted Laurent Wauquiez, who thanked ” from the bottom of the heart “ all those who testified to him “Such a broad confidence which went far beyond all expectations”. The outgoing president then addressed “To all those who did not vote” : “Next Sunday, I need your support and I need it to be as broad as possible, because the more this support will be broad, the more our region will be solid to turn the page on this crisis together. “

With 45.8%, Laurent Wauqiez (LR) confirms that he is the favorite of the poll (according to Ifop-Fiducial estimates for TF1 / LCI). Former president of LR between 2017 and 2019, the interested party is betting on a re-election to bounce back at the national level.

With the elimination of the presidential majority list (Bruno Bonnell, 9.4%), there will therefore be a triangular in the second round between the right, the RN (Andréa Kotarac, 12%) and the left. The latter totals more than 30%: Fabienne Grebert (EELV, 14.3%) is ahead of former minister Najat Vallaud-Belkacem (PS, 10.9%) and Cécile Cukierman (PCF-LFI, 5.1%).

The duel between former ministers Renaud Muselier (LR), outgoing president, and Thierry Mariani (ex-LR supported by the RN) turns in favor of the first: 34.5% against 33% (according to Ifop-Fiducial estimates for TF1 / LCI estimates XX) in Provence-Alpes-Côte d’Azur.

In 2015, the far right, then represented by Marion Maréchal-Le Pen, had already obtained similar scores (41% in the first round, 45% in the second). The withdrawal of the left between the two rounds had reshuffled the cards and allowed the right to win. What will it be this time? During the entire campaign of the first round, Jean-Laurent Felizia (EELV-PS-PCF, 16.5%) remained silent on his intentions.

Renaud Muselier, on the other hand, will not be able to count for the second round on a rapprochement with the presidential majority since, unique case in metropolitan France, he had immediately integrated it into his list, against the advice of the national leadership of LR and of its first federation in terms of membership, those of the Alpes-Maritimes. The second round will say whether or not this choice will have been effective against the RN.

Xavier Bertrand confirmed that he would, for the second round, submit the same electoral list “With the same ambition and the same project: to fight for you”.

Hauts-de-France. Xavier Bertrand (various right), the outgoing president supported by LR, is largely in the lead with 42.5% of those cast (according to Ifop-Fifucial estimates for TF1 / LCI).

With less than 10%, Laurent Pietraszewski (presidential majority) is not qualified for the second round. The executive had however tried to provoke a “shock of notoriety” by presenting no less than five ministers. This non-qualification of the Secretary of State in charge of pensions is good news for Xavier Bertrand, who thus has a reserve of votes without having to compromise with the macronists.

Even if he left LR in December 2017, Xavier Bertrand aspires to be the right-wing candidate in the presidential election, a ballot for which he is already in the running. His re-election as president of the regional council is the first condition. Otherwise, he warned, he would give up political life.

The left, which had withdrawn in 2015 facing the risk of victory of the extreme right, at the time represented by Marine Le Pen herself, reached 18.4%. This is the only region where, behind Karima Delli, she has managed to form a single list, from the PS to LFI via EELV and the PCF.

⇒ 20 hours [ESTIMATIONS] Right in the lead, the RN performed worse than expected

In most regions of France, the National Rally (RN) is ultimately doing less well than expected. The Republicans (LR) and, to a lesser extent, the Socialist Party (PS), are holding on.

⇒ [CARTE] Find the results for your region

Which list is at the top in your region? Find all the results from 8 p.m. by clicking on the image below.

⇒ 7:30 p.m. [ENTRETIEN] The complexity of the ballot, one of the explanations for the high abstention

For Céline Braconnier, director of Sciences Po Saint-Germain-en-Laye and specialist in electoral participation, the low turnout in the ballot this Sunday is the result of a fundamental movement, to which is added the poor readability of the double ballot .

“The end of the health crisis and the desire for something else undoubtedly play a role. As well as the impact of the epidemic on the campaign (…) But today’s abstention only prolongs the electoral demobilization that has been observed for more than twenty years and which is only increasing “, analyzes the specialist.

⇒ 6:35 p.m. [PARTICIPATION] Corsica and Occitania more mobilized than others

Many voters, surprised, discover the existence of two simultaneous ballots. “We arrested a lady who was going to put an envelope in the wrong ballot box. And also a voter who complained of not finding the ballot of the candidate of the presidential majority, while the majority does not have a candidate in the canton… ”, lists Fanny.

⇒ 18 hours [ANALYSE] The principle of super regions in question

They were announced as monstrous, disconnected, piloted by political and economic “dwarfs”. In 2015, thirteen regional presidents replaced the 22 outgoing and took control of territories with sometimes uncertain identity and often gigantic dimensions. Six years later, the diagnosis is much more balanced.

⇒ 5:37 p.m. [LREM] Weigh without winning, the strategy of the presidential training

In the two regions where La République en Marche could hope to win, Center-Val-de-Loire and Brittany, the cards are finally blurred. But everywhere, LREM is pursuing its objective for the presidential election: to amplify the work of annexation to the right and to the left that began in 2017.

The National Rally sees this election as an opportunity to confirm the new polarization of French political life, with the far-right candidate on one side, and Emmanuel Macron on the other. The particular configuration in Provence-Alpes-Côte d’Azur, where the candidate Renaud Muselier (LR) brings the union between his party and LREM, could give it the first regional basis in the history of the party.

26.72% of voters went to the polls for this first round of regional and departmental elections. The abstention would amount to 66.5%, according to an Ipsos / Sopra Steria poll for France Télévions, Radio France and the Parliamentary Channel. It would be slightly higher at 68% according to Opinionway for CNews, and for Ifop Fiducial for TF1 / LCI. It would amount to 68.5%, according to Elabe for BFM / RMC. The Harris Institute for M6 estimates participation at 31.4%.

Hello and welcome to our live devoted to the results of the first round of the 2021 regional elections. From 8 pm, you will find the first trends region by region. But also the analyzes of our journalists, information on the conduct of the ballot, the reactions of the main candidates, etc.