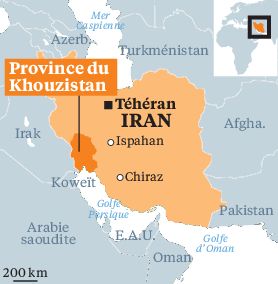 
“We are thirsty! ” For the sixth night in a row, the inhabitants of Khuzestan, this southwestern Iranian province bordering Iraq, took to the streets to shout their distress at the water shortage affecting the region and call for the fall of the regime.

At first peaceful, the demonstrations seem to have degenerated. Numerous videos posted on social networks show the use of tear gas, bullet shells and even live ammunition by Iranian security forces against the crowd. They could not be independently verified, but at least two young protesters and a police officer are believed to have died in the clashes. Internet was cut Tuesday, July 20 in the evening in several cities of the province.

The country is facing the worst drought in 50 years with a 50% drop in rainfall. Droughts are chronic in Khuzestan, but the situation is getting worse every year. “You can’t even take a bath or a shower with running water!” “, testifies a protester. Water cuts regularly affect the cities of the region, while during the day, the thermometer is close to 50 ° C. The fields of date palms, the most important crop in the region, have almost disappeared, overcome by the lack of water.

Even more than global warming, it is the disastrous management of water resources by the Iranian government that is singled out. “40% of the waters of Iran’s rivers pass through this region, recalls the geographer and researcher emeritus at the CNRS Bernard Hourcade. But this water is diverted to the central Isfahan plateau. “ The massive diversion of water from its natural reservoirs to other regions and industries has caused irreversible damage to many provinces of Iran.

“Hundreds of hydraulic dams have been built on salty soils. The water reserves have also become salty, causing the palm crops to dry up ”, laments the Iranian specialist at Sciences Po Mahnaz Shirali. There is no purification plant to recycle water.

It is not the first time that Khuzestan has risen against the lack of water. In 2018 riots had already broken out in several cities in the region. A year later, it has become one of the hot spots of the protest – violently repressed – against the rise in the price of fuel. Once a prosperous region for its agriculture, Khuzestan now considers itself neglected by Tehran although it still shelters the country’s most important oil fields.

“The movement is gaining momentum”, observes sociologist Mahnaz Shirali. Videos showed Tuesday night of women chanting “Down with the Islamic Republic! “ in the metro of the capital Tehran, 500 kilometers north of Khuzestan. So far discreet on the issue, Iranian media on Wednesday broadcast images of queues of trucks sent by the Revolutionary Guards to supply Khuzestan with water.

confronted with found riots Where is